The Aurora East Educational Foundation (AEEF) was established in 1993 and is a not-for-profit tax-exempt 501 (c)(3) corporation. Organized under the laws of the State of Illinois, the AEEF provides funds and resources for the enhancement and enrichment of the educational programs and activities of East Aurora School District 131. The AEEF attracts private funds and resources to support programs and services not funded with tax dollars.

The AEEF is directed by a group of private citizens, many of who are graduates of East Aurora High School or are district residents who serve without compensation. The efforts of AEEF are supported by the Board of Education.

Within three short years from its founding in 1993, the Aurora East Educational Foundation (AEEF) met its first goal of establishing an endowment fund. The interest from that endowment is used to fund educational programs in East Aurora School District 131 – programs that would otherwise not exist for lack of financial support. During its history, the foundation has funded scores of programs that have touched the lives of thousands of students throughout East Aurora School District 131.

The AEEF continues to support the graduating students of East Aurora High School. Students can apply for college scholarships through the Community Foundation of the Fox River Valley. In 2001, a Career and Technical Education fund was created to support students in career training.

Read about AEEF In the News 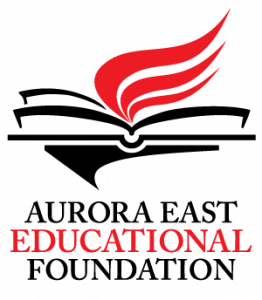